CORDZ2000
Team Hitch
@Mediocre-Grimm
u know i can pull the worst portrayal of any character in this series and make that who they always are. That wat your doing is ron the death eater since u like to look at him only in a bad light. U refuse to acknowledge what he did to starlight is something that discord at the point if he was in character would never do.
Posted 27 days ago Report
Link Quote Reply
Mediocre-Grimm
@CORDZ2000

I’m not quite sure what you’re trying to say. I’m just saying that Discord has consistently shown he throws fits whenever he’s offended. He did it at the Gala with Smooze, He wanted to make Twilight jealous in ‘What about Discord, he tried to ruin Starlight’s day when she was picked over him. Yes, he’s ‘behaved’ most of the time, but when he feels offended or angry he gets sadistic.
Posted 27 days ago Report
Link Quote Reply

CORDZ2000
Team Hitch
@Mediocre-Grimm
that pretty much falls under his pride, he acts out instead of talking about his feelings
Posted 27 days ago Report
Link Quote Reply

your current filter.
Posted 27 days ago Report
Link Quote Reply
Background Pony #5697
>”He was trying to help Twilight with her confidence!”
>”He’s the Spirit of Chaos, he HAS to cause chaos!”
>”His arrogance causes him to have poor judgment!”

Why do Discord defenders sound like battered housewives making excuses for their abusive husband?

>”He was trying to help Twilight with her confidence!”
>”He’s the Spirit of Chaos, he HAS to cause chaos!”
>”His arrogance causes him to have poor judgment!”
Why do Discord defenders sound like battered housewives making excuses for their abusive husband?

Counting Blue Cars
I’m still sticking by my opinion about him messing things up in the finale and only being fueled by selfish and foolish gains, but I’m always willing to see the other side of the argument. I don’t agree with most of what you said, but I can at least understand it. He did realize how much he screwed up and didn’t try to double down and think that what he did was right and at least tried some form of damage control. Frankly, I think that’s good enough for me. With that, I’m not gonna vilify him or make him out to be some sadistic monster, just someone who really should’ve thought harder about what he was trying to achieve.
Posted 26 days ago Report
Link Quote Reply

Muh themes!
I’m willing to accept that it’s in-character for Discord. But by the end of the show, Discord was just sort of a dumbass who couldn’t think before acting. Like, say what you want about his intentions, but what he did was objectively stupid and careless.

Imagine if Discord was characterized as this asshole trickster god that the ponies put up with because there’s nothing they can do about him. He’s always in control of the situation. They can’t browbeat him; he snaps things back to normal because he’s had his fun. Then, him losing control the Legion of Doom situation would actually mean something. These villains pulled a fast one, and now the being that’s always in control has just lost control. That would be a real “oh crap” moment.

Instead, Discord consistently screws up even the most basic tasks, so of course he was going to screw this up. Losing control of the situation should have been a humbling experience for him, but if he didn’t learn his lesson from getting betrayed by Tirek, there’s no reason to assume he learned anything this time, either. It’s only a matter of time before he tries something like this again.

Daddy's home!
@DerpyFast
Maybe, but who says things like this can’t make a story or character interesting? Also, Discord is clearly a strong believer in the idea of growth through adversity.
Posted 24 days ago Report
Link Quote Reply

CORDZ2000
Team Hitch
SPOILER: he actually has grown from this if u see s10@Mediocre-Grimm
Posted 24 days ago Report
Link Quote Reply


I haven’t seen the comics. Did he try to make amends with the Legion of Doom?

Sorry, I replied to the wrong person.

I haven’t read the comics. Does Discord try to make amends
with the Legion of Doom?
Posted 21 days ago Report
Link Quote Reply 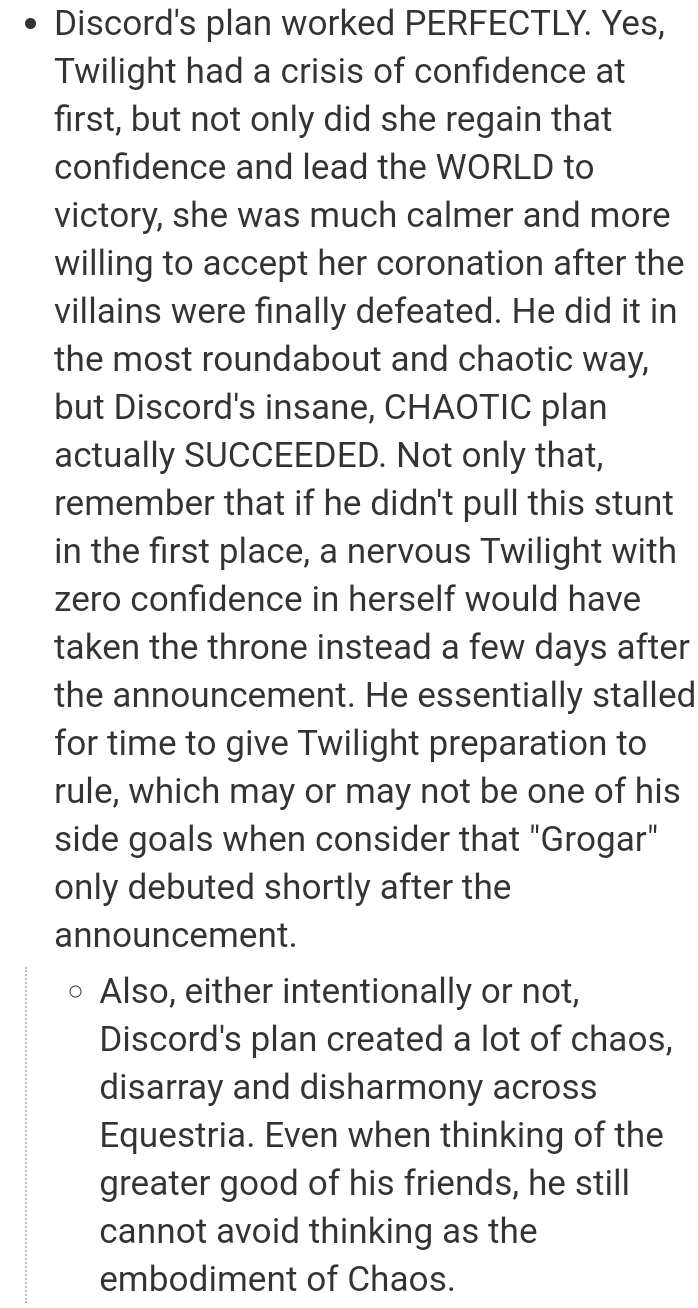 Regardless of whether or not it worked, he had no right to gamble with people’s lives. His friends could’ve gotten hurt, and worse yet he was always planning on the Legion of Doom to get hurt, maybe even killed.

CORDZ2000
Team Hitch
@DerpyFast
Discord is far from a dumbass hes very intelligence he manipulated the mane 6 in his first appearance but lose because he didn’t get rid of the elements. He was manipulating the trio for months before getting betrayed when he underestimated them. He has often manipulated events to go his way. He came up with the plan to free starlight which he had to trick 3 smart villains to do. The problem is his extreme arrogance bites him in the butt whether and at times stil struggling with friendship then actually being dumb.
Posted 18 days ago Report
Edited 18 days ago
Link Quote Reply
Interested in advertising on Derpibooru? Click here for information!